skip to main | skip to sidebar

Our 2 incredile months in Buenos sadly came to end. 2 months goes fast! 2 of my best friends, Ashley and Allison, came down to visit for our last week, which of course was incredibly fun.

All of us went together to our first stop out of Buenos which was Iguazu Falls, located on the Brazilian/Argentine border. We only had one day there so we spent the entire time on the Argentine side because everyone we talked to said its the better of the 2 sides. The waterfalls are so gorgeous - I´ve never seen anything like it in my life. Hopefully we´ll have some of the pics up soon because the scenery is really too hard to even describe. After hiking for most of the day, we hopped in a boat at the bottom of the falls and the boat driver proceeded to drive us directly under the falls! It was crazy - you literally have a massive amount of water pounding down on you and its impossible to see anything. Its one of those experiences where you´re kind of scared and you just can´t stop laughing. We all loved it :)
Posted by Kat at 8:28 PM No comments:

We went to Mendoza, Argentina's wine country, a few weeks ago.  It was definitely our most gluttonous weekend.  Of course we wanted to do a tour of the wineries, but instead of the traditional way, we decided to go on bikes. We rented bikes in the morning from a company called Bikes & Wine and we were on way. We biked about 34 km total and went to 7 wineries, an olive vineyard and a chocolate factory. It was incredible and soooo yummy! It was also very very hard on our bums - hurt pretty bad the next day.  The most interesting place we ate at was 1884, Argentina's most famous chef, Frances Mallman's, restaurant. The steaks there were at least 3 feet long, at least. Ridiculous. Really really ridiculous.
Argentina is know for their Malbec - a red grape from Bordeaux, France. It is used as a blending grape in France but in Argentina it stands on its own and produces an amazing wine with great flavor. Right now, it is the most widely planted grape in the country. Yum...
Posted by Kat at 7:16 PM No comments:

So we've gotten a little lazy with the blogging...oops. Trying to catch up now.
We went to Uruguay a few weeks ago where we covered 3 cities in 3 days (its a pretty small country).  We took a 1 hour boat ride from Buenos to Colonia, a small historical city in Uruguay. It was a beautiful little place - cobblestone streets, a harbor, cute restaurants - all that adorable stuff you find in old cities. We spent the night there and then left the next day for Punta del Este, which is considered the Miami of that part of South America. I don't know about that comparison but it is definitely a really nice beach resort town - gorgeous beaches, designer stores and fancy restaurants. We were there during off-season so it was quieter than usual. And we saw 3 sea lions up close! They're way bigger than I thought and they make some wacky grunting noises.
The next day, on our way out of Punta del Este we went to my favorite place in Uruguay - Casa Pueblo. Its a huge estate designed by Uruguayan artist, Carlos Paez Vilaro who wanted to create a sculpture to live in. It is so incredible! Seriously, a work of art. The outside looks like a Dr. Suess palace and the inside is a cave-like maze of tunnels lined with paintings by Vilaro. Now, it is used as a hotel. Check out the pics!
We spent our last night in the capital city, Montevideo. Probably the least exciting of the 3 cities but we still had fun. We found a bar with really great live music and a group of amazing salsa dancers.
Posted by Kat at 9:12 AM 1 comment:

Buenos Aires has a ton of professional soccer teams.  The most famous two teams are Boca Juniors and River Plate, and when they play each other -- the "Superclasico" -- as they did this past Sunday, the whole city shuts down.  The most recent iteration of the game took place at Boca's stadium, La Bombonera.  While the available tickets for this game were a bit outside our price range, we did find a fun bar to watch Boca win 1-0.  However, we did catch a game at La Bombonera a few weeks back, and here's an idea of what it was like:
The game we went to was against Newell's Old Boys, whose name goes back to the early 1900's when a group of students named their group after their British teacher.  We went with a group of friends and by the time we all got there, the box office only had tickets for the "popular" section - basically where all the crazies are.  The band (which means dudes with drums) were blocking the center so we were forced to go a little to the side - this turned out to be a good thing since the center of the popular section is almost too ridiculous. And, Kat was definitely one of the only girls in the area. We pretty much parked ourselves and tried not to look too foreign as we'd heard some stories of what to expect in those sections.  The game was amazing - the singing and the drums didn't stop once during the 2 hours (incredible...seriously).  The fans also really like to climb on the fence around the field and wave their hands in a way that I can't really describe (see video).  The above video is the best we could do while trying not to broadcast the fact that we had a digital camera, but youtube has some others that might give you an idea of what a boca game is like.   Luckily, Boca beat Newell's 2-1 with great goals from Rodrigo Palacios and Martin Palermo, and the mood on the way out was festive.  We'll try to catch some more games in the next month.
Posted by Greg at 8:05 PM No comments:

So we go to this insane Drum Show ever Monday night. So fun!
2 of the instruments we've seen - an electric mandolin and a keytar (like on Flight of the Concords) - sooo crazy.
Electric Mandolins are pretty badass.
xo Kat
Posted by Greg at 9:50 PM 1 comment:

We finally made it to the Recoleta Cemetery, one of the biggest tourist attractions in our neighborhood. Its really unbelievable - its set up in sections with city blocks separated by tree-lined walkways. All of the graves are mausoleums (like in New Orleans) and they are ridiculously elaborate. They are basically mini marble houses for coffins in an array of architectural styles. Some even had stairs on the inside that lead to a basement level. You can't go inside them unless you have the key (not that you would want to) but you can see into them through windows. One of the craziest things was the number of stray cats in the cemetery - we saw at least 2 dozen. It is definitely a creepily magical, mysterious place. Next time we go we will find Miss Eva Peron's grave - the cemetery is too big to cover all in one day and apparently her grave is more humble than you would expect.
Posted by Greg at 9:38 PM No comments: 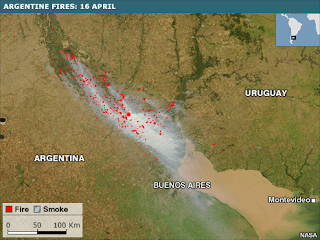 According to President Christina, this smoke along with the earlier farmers strike are all a result of soybeans.  I just hope that this is really an accident and not a calculated negotiating tactic to try to smoke out Buenos Aires.  If that were the case, that would be pretty whack.
Posted by Greg at 3:30 PM No comments: 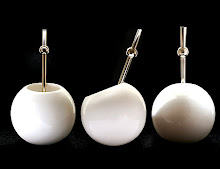